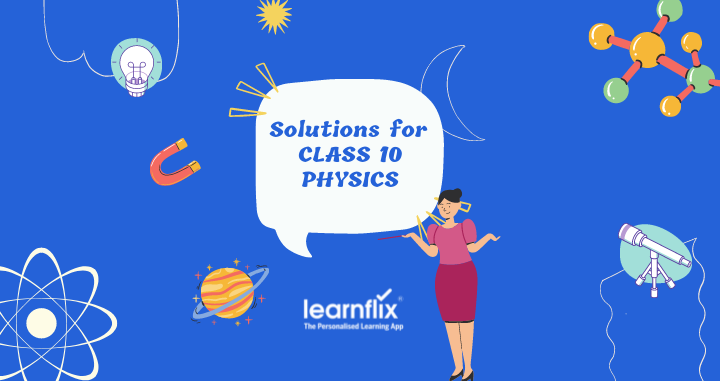 CBSE Class 10 Physics Syllabus may be challenging, but with the right app it can turn into cakewalk. Through this app, class 10 physics chapters 1-5 are explained in depth, with careful attention given to each chapter's core points, along with solution. Thus, tackling the physics class 10 CBSC syllabus solutions and study matter, in a way that engages and educates

Class 10, is a crucial year in the growth, development and the education of a child. It is imperative that the content at this level strongly emphasises on problem solving attitude, awareness of surrounding and critical interrogation on different concepts of Physics. Solutions to the class 10 physics chapter are also made available, in addition to learning assets like assessments, revision notes, sample papers, NCERT solutions, eBooks and and CBSE class 10 physics syllabus help in deepening the understanding and preparing for physics class 10 CBSC examination.

Chapters varying from, Reflection of Light to Refraction of Light, covered which are covered in part one, along with Spherical Lenses and Spherical Mirrors, which are also covered in the same section. Chapter2 is based on The Human Eye and the Colourful World, delving into topics such as Refraction of Light, Scattering of Light and also the topic of The Human Eye. The third chapter is based on Electricity, with focus on the topics of, Electric Current and Electric Potential, Heating Effect of Electric Current, Ohm's Law and Resistance as well as Resistors in Series and Parallel. Magnetic Effects of Electric Current, is covered in chapter four, with sub chapters based on, Domestic Electric Circuits, Electric Generator, Electric Motor, Magnetic Field and Field Lines and a sub chapter based on Magnetic Field Due to a Current Carrying Conductor which is included on the app. The final chapter is about the Sources of Energy, thus delving into topics such as Conventional Sources of Energy, Non-conventional Sources of Energy and Sources of Energy and Environment.

Study has shown that it is possible to learn better when an individual is in an environment which makes them feel safe and secure. Learning apps provide just that, thus being able to let the child unleash their optimum protentional, do well in their board, and whilst doing so, enjoy the process of learning, and thus get emerged in the subject, with a desire to learn more.

Remember, The CBSE Class 10 exam is one of the milestones in a student’s life. The content of CBSE Class 10 Physics syllabus is designed keeping in mind this information; when, through the course of the learning course, the student is introduced to topics such as concepts of light, the human eye, electricity, the magnetic effects of current and the sources of energy, they are able to grasp this information and skilfully relay it in their final exams.

All the information is based on the Latest CBSE syllabus. Just bear in mind, with the legacy of more than 80 years, the knowledge passed on is of the highest quality, what's more is it is brought to you in the most effective, engaging and affordable manner, thus working as the ideal learning solution for students.

Learnflix online videos are marvellous provided children should watch carefully and listen to it word by word, followed by objective and subjective test and in last the “revision”.
I am impressed with the “Analytics” part, as it gives us a complete picture of your child activity on a particular topic

I find this app quite comprehensive and interesting. Commendable way of teaching. It has helped me a lot in memorizing things and easier understanding of the concepts. It has increased my speed & accuracy as there is an ample variety of practice questions. Videos are quite impactful along with the excellent revision notes on each and every chapter.

I have found the Learnflix app to be very useful for my child. The course content has been structured lucidly which makes it all the more interesting and engaging for kids. The animation is excellent and easy-to-grasp. The makers deserve a big appreciation for the same.

Available on Mobile, Tablet and Desktop